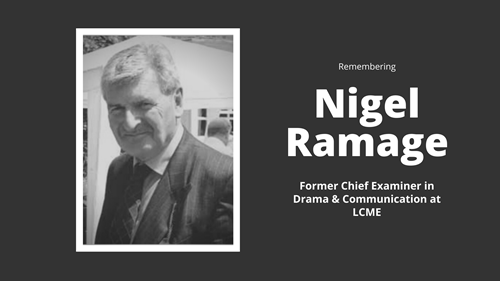 Meeting Nigel was always a joyous occasion. He could find humour in any situation while also maintaining a professional composure if necessary.

Nigel was Chief Examiner in Drama & Communication for LCME from 2011 until his retirement in 2019.  Indeed, the fine Speech & Drama syllabi which he created are still in use by 1000s of candidates today.

A consummate actor, Nigel always had a wealth of entertaining anecdotal incidents to share about his experiences, although he did not often reveal that he had been a successful Headmaster of a Prep School in Surrey and an outstanding Head of English and Senior Tutor at Papplewick School.

Nigel brooked no nonsense but had the ability to inspire and challenge at the same time, and examiners will always remember his joyful contributions to the annual LCME Seminars.

Nigel Ramage was an outstanding character and a wonderful colleague in many ways. Those of us who worked with him will not forget the way in which he lit up the mood of a meeting, generating an enthusiasm and a positive outlook which carried us all along with him. The resonant quality of his voice was a constant delight.

It is impossible to list all the ways in which Nigel demonstrated his abilities, but I recall witnessing him adjudicating at a competition in Hong Kong, and giving such quality feedback to the children, whilst clothing it in his comedic manner.  He could appeal equally to the young and to the older, such was the breadth of his abilities.  He created the handbooks for drama and communication, which was a considerable milestone for the exam board, and, whatever the context, he showed his humanity and generosity to all, dealing with examiners, other colleagues, and students with unfailing quality.

He was indeed an outstanding examiner and became equally significant as the chief examiner for drama and communication, in which capacity he provided me with wonderful support.

He was a very modest person and would not talk about his own considerable career as an actor and educator.  Details had to be prised out of him, if at all, as Philip Aldred and I recall trying on many occasions. It was always a delight to be in his company and to engage in conversation with such breadth; for me, that included our mutual love and enthusiasm for cricket, but also many other areas.  There was never any doubt that Nigel Ramage was a generous giver and an excellent warm-hearted human being; we mourn his passing but carry his memory and spirit in our hearts.